Over the past year I’ve worked on the tools to execute and grade code behind the scenes at DataCamp. This work has ranged from expanding our open source tools for grading R and Python code, to running SQL and bash exercises. However, while helping scale up education data science education to thousands of students is something I’ve wanted to do since helping teach statistics in grad school, there’s is a certain sanity in being in a room with handful of students.

Recently, I had the chance to teach two short workshops, both with an emphasis on data science:

For both cases, the initial example students saw used the Spotify API. This API lets you find your favorite artists, and plot different characteristics of their songs. Characteristics include a song’s “danceability”, “energy”, “speechiness”, and “valence” 1. For example the plot below shows these characteristics for two famous Beatles ditties. 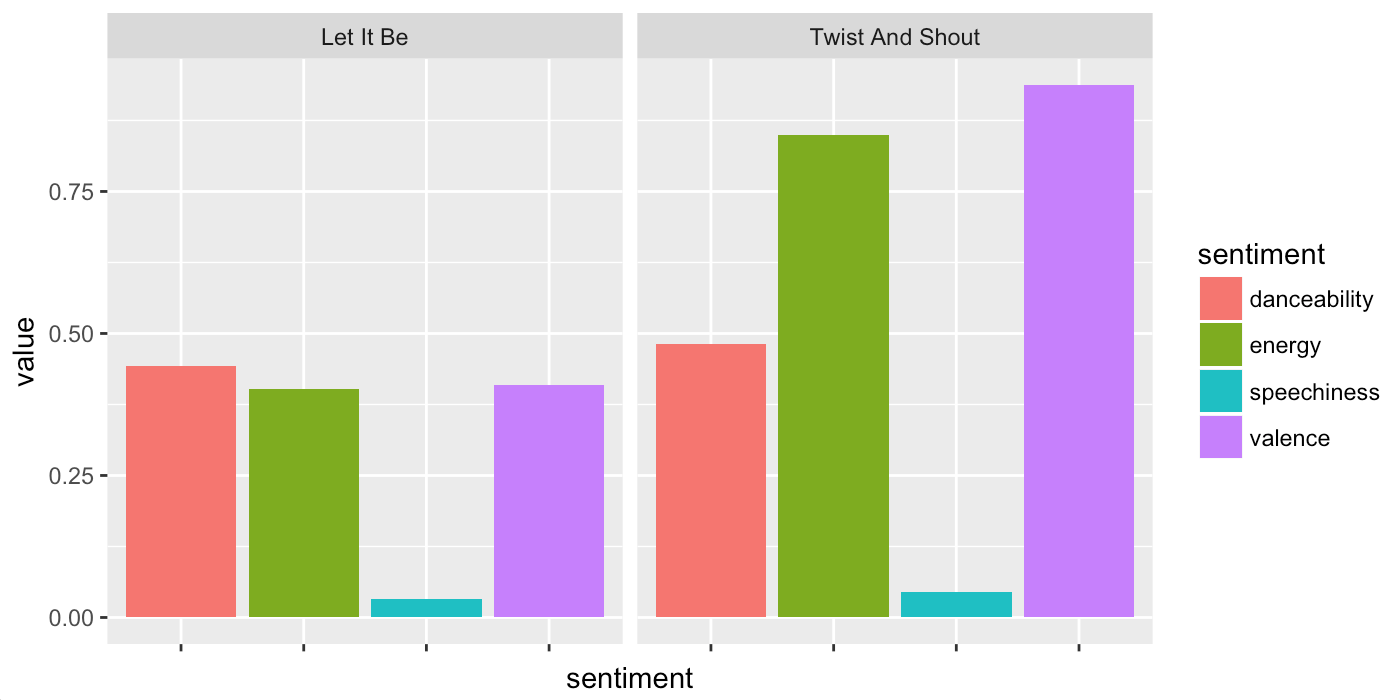 In general, running the Python workshop was much more challenging, in that it required teaching things like functions, lists, dictionaries, and pandas DataFrames. On the one hand, putting up a jupyterhub server let people get started right away. On the other hand, I was at a total loss on how to explain to people across a range of technical backgrounds how to do something as simple as open a jupyter notebook on their computer. 2

By contrast, using R was a delight. By using the Rstudio Server, and a little bit of dplyr and ggplot, students were up and running right away. Inspired by the simplicity of Dave Robinson’s recent Introduction to the Tidyverse course, and convenience of the charlie86/spotifyr returning data frames from the spotify API, I was able to leave out all mentions of functions, loops, and all that jazz 3. We got right into the data.

In a future post I’d like to think about how to make a Python workshop work, but for the rest of this post I’ll focus on R.

Every section used an example script, and then a worksheet.

For example, the first 3 “chunks” planned were..

I Won’t go into detail on how to teach dplyr verbs and ggplot, since you can see them on the tidyverse course. Instead, I’ll focus on the big example we used to work backwards.

Once students logged in to Rstudio Server5, I had them open an example script that looked up an artist, and then let them do three things:

In each of these steps they could modify a string to change the selected artist, album, or characteristics. One goal of this script was to make the pieces that could be modified so clear they didn’t require programming knowledge to change.

In this case, students were shown how to run code, and instructed to run these lines (using their line numbers).

I like that they can quickly sort songs by popularity and use the search bar in the view pane to find songs and albums. Also, it has a convenient option to filter using any of the columns. While they leafed around the data, we discussed which columns they thought looked like song characteristics6.

After going through the rest of the examples below, I had them try changing “The Beatles” to their favorite band. (and learned that for some students choosing a favorite is a harrowing decision).

2) Scatterplot of energy vs valence

In this case, students saw a scatterplot of energy vs valence for a single album. When we went through it the first time, I briefly mentioned that the filter function was cutting out rows of the data, just like they had done when filtering in the View pane.

After they had selected their own favorite artist in the previous example, I had them find an album via the View pane, and write it in to the filter statement above7.

3) Barchart of 4 characteristics for some songs

Right off the bat, let me just note two things

When modifying the script to explore their favorite band, I had them try changing the characteristics selected (e.g. adding acousticness to the plot).

Seeing students engage with data right off really shook me up! Based on some feedback from the workshop, I’m really interested to try creating compelling examples using game data, sports data (e.g. www.sportsdatabase.com), and whatever else students might find compelling.

My plan is to clean up the repo used, and to maintain the examples there.
If you’re interested in tackling the challenge of getting students into the world of data, definitely get in touch.